It was a huge honor to be asked by Nikon to help launch the new Nikon D4s. Over the last month, I’ve been hustling with an incredibly talented crew to create the motion campaign that will help launch the Nikon D4s.

Nikon developed an incredibly intriguing idea for the video component of the D4s campaign. They wanted me, a still photographer and a filmmaker/director, to use the D4s to shoot an inspirational film about three prolific photographers using the D4s to create powerful still photographs within their genres. Those photographers would be Dave Black, Robert Beck and George Karbus. Secondarily, they wanted us to shoot a behind-the-scenes film about the making of “DEDICATED.” Therefore, the film would be multi-layered in that it would tell stories within stories. Most camera-release videos involve setting stunning motion content to a nice soundtrack. “DEDICATED” breaks from that by verging on a very documentary-style approach, one in which authenticity and passion are the focus. I know we captured some great content in the field, and now our task is to transform that into a powerful short film. Of course, now we are facing some seriously long nights in the edit suite! 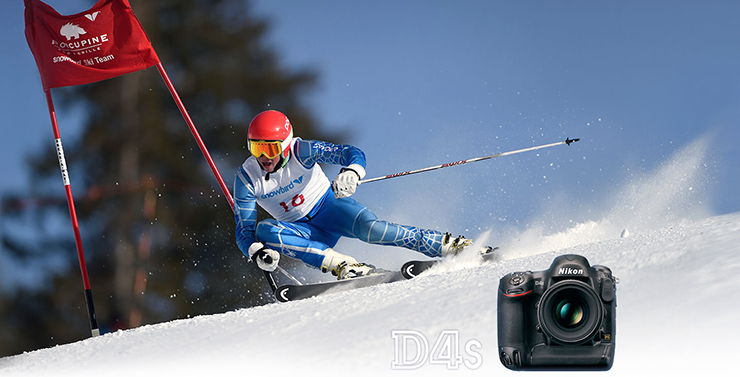 Dave Black is a good friend of mine and one of my role models. He has a sharp sense of light and design that distinguishes him from the pack. Robert Beck’s stunning action photographs have changed the way we see and think about sports. And George Karbus is a fantastically talented outdoor photographer specializing in landscapes, seascapes and marine wildlife.

My team and I would capture these three photographers out in the field as they document their subjects—everything from ski racing to speed skating, rugby to motocross, super-bikes to coastal waves. We also shot “A-Roll” of Black, Beck and Karbus’s subjects. In other words, while they shot stills, we captured their subjects in Full HD video with the D4s.

We also conducted interviews with each photographer and tried to capture their unique passions and philosophies for photography. The goal was to get inside their heads, and address the concept of what it truly means to be “DEDICATED”.

This opportunity to watch them perform their craft at the highest level, was a complete treat for me. It was fascinating to hear what made each individual tick, and what has kept them inspired after all these years. All four of us and the crew were completely blown away by how badass this camera is. The D4s is, hands down, the best still and HD-SLR camera any of us had ever used. But for me, where it really shined was its stunning motion image quality. Highlights, to name of few, were an auto ISO functionality, the ability to now shoot in 60p at Full HD, a new 9,999 image limit for intervalometer shooting, and the incredible sharpness of 2.7x crop mode.

Today, we’re excited to share our trailer for “DEDICATED,” a film about three great working photographers of our time. The full-length short film will release in March.

Stay tuned for future posts as I share more in-depth behind-the-scenes stories of these past 21 days of whirlwind travel with our team and 26 cases of equipment. To give you an idea of where we’ve been, we started out in Reno, flew to Salt Lake City, then to San Diego, then to Tampa, and finally over to Ireland, where we experienced one of the worst storms in the country’s history.

Now that I’m home, rolling up my sleeves in the edit suite, I’ve realized that one of the best parts for me was getting to travel for nearly a month with my friends and family. We all went into it as friends, but came out of 21 demanding, long, stressful days even better friends than before. This was also the first extended trip I got to take with my wife Marina, and my seven-month-old daughter, Leila. At the end of the day, that’s what it’s all about.

A HUGE thank you to the amazing folks at Nikon for making this project a reality and continuing to make the most reliable and innovative camera equipment on the planet.

To K&L Inc. in Tokyo, Japan—specifically, Gen Umei, Shusuke Nakano, Kazuaki Takai and Kelichi Natsume, for believing in us, presenting this opportunity and making great travel partners throughout this production.

Robert Beck, Dave Black and George Karbus you continue to inspire, thanks for making it happen and for your patience in the field. I really admire still photographers and their ability to work with a camera and a few lenses. Sorry we travel with so much equipment!

To all of our sponsors and partners, we could not have captured and produced this project without your support — THANK YOU! To everyone at Nikon and the Nikon USA Ambassador Program, Brian Pridgeon at SanDisk, Tabb Firchau & Mike Hagadorn at Freefly Systems, Pat Grosswendt & Alan Ipakchian and everyone at Litepanels, Chris Kearns & Joel Andrews and the whole team at SmallHD, Phil Gallagher and the crew at AquaTech, Julie Schaffner at Oakley, Adobe, Adorama, Clif Bar, Epson, G-Tech, Lowepro, Manfrotto, Paralinx, Patagonia and X-Rite.

Lastly, we could not have completed this shoot without the dedication and continued support of our entire team, all of whom played critical roles.

ASK COREY: I have a Nikon D4. Should I upgrade to the new Nikon D4s?

What a blast! Awesome work as always Corey and team! Thanks for the write up; looking forward to more BTS and of course the feature. Psyched!

Great work as usual Corey!!
It must having been a thrill to shoot this video.

ps: now I see why you were in Ireland… Nice angle on the Cliffs of Moher.
Next time you’re in Ireland give me a shout. Would love to meet you and buy you a pint’o Guinness!

[…] on paper, we would rather see the proof. Nikon commissioned photographer/videographer Corey Rich to create a film about three photographers who are using the D4S to shoot – filmed with the D4S, of […]

[…] → Corey Rich released a trailer for his upcoming film called "Dedicated". The entire trailer was shot with the new D4s camera: […]

[…] → Corey Rich released a trailer for his upcoming film called “Dedicated“. The entire trailer was shot with the new D4s camera: […]

[…] already, and it shows how good a D4S is during holding video, In retrospective, Rich writes on his blog that a D4S is “hands down, a best still and HD-SLR camera any of us had ever used.” […]

[…] episodes of “Dedication” later this month. You can read a great recap of the project at Cory Rich’s blog and below if the trailer for the […]

[…] on paper, we would rather see a proof. Nikon consecrated photographer/videographer Corey Rich to create a film about 3 photographers who are regulating a D4S to fire – filmed with a D4S, of […]

[…] In a neat little marketing stunt for the launch campaign of its latest flagship camera, Nikon commissioned Ambassador Corey Rich to put together a film called “Dedicated.” […]

I’m sure you’re killing it in the editing! I have loved your other Nikon work–particularly ‘Why’–and the behind the scenes stuff is just as awesome. You know you’re doing good work when people are stoked and anxiously anticipating whatever you’re going to do next!

[…] In a neat little marketing stunt for the launch campaign of its latest flagship camera, Nikon commissioned Ambassador Corey Rich to put together a film called “Dedicated.” […]

[…] In a neat small selling attempt for a launch debate of a latest flagship camera, Nikon consecrated Ambassador Corey Rich to put together a film called “Dedicated.” […]

[…] it’s capabilities. Featuring photographers Dave Black, Robert Beck and George Karbus, “Dedicated” is meant to give some insight into the D4s by following the pros around as they use it in […]

Well done! Very impressive. Shows what can be achieved with a D4s!

[…] is a still camera.  I am personally a big fan of Corey Rich’s photography and he is doing a launch video for this camera for Nikon.  He followed around Dave Black, Robert Beck, and George Karbus and did video of them doing what […]

Hey there exceptional website! Does running a blog like this require a lot of work?
I’ve absolutely no knowledge of coding however I was hoping to start my own blog soon. Anyways, should you
have any suggestions or techniques for new blog owners please share.
I understand this is off subject however I just needed to ask.

[…] it is a still camera. I am personally a big fan of Corey Rich’s photography and he is doing a launch video for this camera for Nikon. He followed around Dave Black, Robert Beck, and George Karbus and did video of them doing what […]